All the writings of the little daughter of the
Divine Will and of her extraordinary
announcement:
The carrying out of the Divine Kingdom. 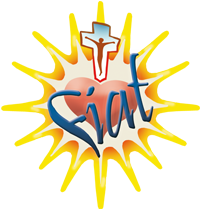 The 36 books are presented in 12 volumes and form a kind of three stages: 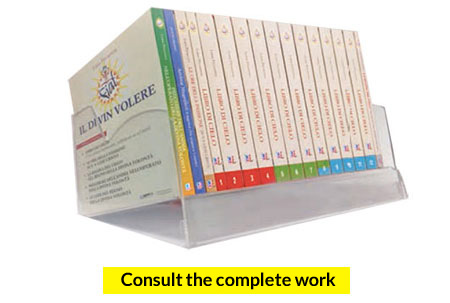 The first stage, formed of the volumes from 1 to 12, correspond with the book “The hours of the Passion” (written by Luisa in the years she was making up volumes 11 and 12); the aim of the first stage is to go along and around the 24 hours of the Passion to imitate Jesus, so as to know Him inwardly and make His inner life ours, going with Him along it in order to copy it in us and to get possession of the work of REDEMPTION.

The second stage, formed of the volumes from 13 to 24, corresponds with the writing called “the tour of the soul around the Divine Will”, which was called “Pious Pilgrimage” by Luisa’s confessor; the aim of the second stage is to go along and around all the works of God, starting from the creation of the world and going on with the creation of man (Adam), of humanity and of God’s people (the holy history), so as to give the Father the correct answer of adoration, praise, thanks and love in the name of everybody and of all creatures, copying His work in us, so as to get possession of CREATION.

The third stage, formed of the volumes from 25 to 36, corresponds with the book “The Virgin Mary in the Kingdom of the Divine Will”, written in 1930; the aim of the third stage is to to go along and around all the life of the Holy Virgin, following the 31 days of the Marian month, in order to learn how to imitate Her interior life directly from Her and to make the work of the Holy Spirit ours, the SANCTIFICATION.

It’s therefore a question of copying the life of the Holy Trinity and the Three Divine People in our life: this is the aim of our life.
THIS IS THE KINGDOM OF GOD

LOOK AT THE COMPLETE WORK

Libraries can request all the Writings by contacting the Publisher directly.
E-mail: francescogamba@gambedit.com / micaelagamba@gambedit.com
See the website: www.scrittidiluisapiccarreta.it 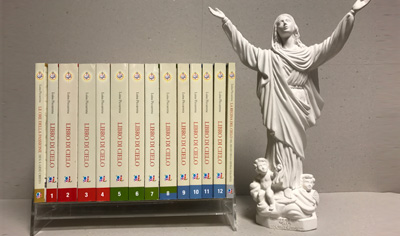